skip to main | skip to sidebar

This is from a 2 minute blitz I played the other night. By no means should this be taken too seriously however there were some interesting aspects to this game which may be helpful to look at. My opponent played the Blackmar Gambit and I transposed it unknowingly into the Caro-Kann ultimately leading to the Advance variation. It occurs to me that this transposition is a good way to avoid the Blackmar Gambit of which I know very little. Unfortunately I do not have much experience playing the Caro-Kann as Black so I did my best to follow general opening principles. For example getting my King to safety quickly.

My opponent never got his King to safety and instead took the bait (the Knight 14. Nxd4). Having previously opened up the f - file this allowed for a deadly checkmate. As the computer suggests White should have simply castled his King.

I clearly have work to do if I am to play the Caro-Kann more effectively but it seems a good option when playing against Blackmar Gambit players. Such games demonstrate why Castling is important for the Kings safety especially when files have been opened up around the King. 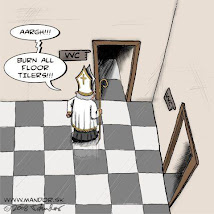